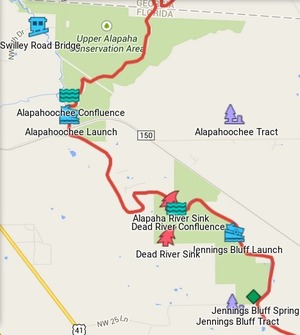 As requested in the grant contract, here is a mid-year progress report for the Alapaha River Water Trail (ARWT). (PDF)

Summary: we have spent no funds; rather we have increased available cash by 150% and in so doing acquired additional sponsors. We have already met all the requirements of the grant contract except printing maps and brochures, and we have already met all the stated criteria of a Water Trail except placing signs at access points. However, the ten members of the Alapaha River Water Trail Committee and WWALS continue to do more.

This is a wild and scenic river, and even experienced paddlers do not know all of it. We continue to hold numerous outings in the Alapaha River Watershed, ranging from easy one-hour floats to expert exploration. Outings during the grant period so far have included two cleanups on the Alapaha River, one upstream where the Water Trail begins at US 82, and one downstream in the dry riverbed below the sinks, near the end of the Water Trail at the confluence with the Suwannee River. Plus several Committee members and other WWALS members attended an Adopt-A-Stream water quality chemical and biological testing training and certification session.

We have held a successful December ARWT Workshop and we will announce the winners of a high school logo contest for the Alapaha River Water Trail at our March ARWT Conference.

The rest of this report details these points.

WWALS has spent none of the grant funds to date. Instead, we have increased the funds available by 150% from two other sources.

The grant contract requires some or all of “Brochures, maps, guides, cards” to “promote the project and encourage community use of the river”. We have prepared materials for those, and will be ready to print them before the end of the grant contract period.

Georgia River Network considers a water trail established once there is a website and map for paddlers to reference. In addition, the trail must have a minimum of two accessible boat launches.

On the WWALS website there is a page for the Alapaha River Water Trail (ARWT), with numerous links to related material. This is a website in the same sense as the Georgia River Network Water Trails Website, which is hosted under the main GRN website. Nonetheless, the Committee is continually considering and implementing improvements to the ARWT website, including possibilities of different formats and even a separate domain name.

The ARWT website covers every topic from GRN’s web pages for each established Water Trail, plus some additional topics.

Additional topics include links to live river level gauge graphs, numerous Lakes, Ponds, and Swamps in the Alapaha River watershed, and Many Years of Harmony among landowners and paddlers, considering that an Alapaha Canoe Trail was actually already established with maps, brochures, and prizes in the 1970s and is still listed in guidebooks.

Material from the new ARWT website has already been used in general WWALS brochures, along with a draft map. A standalone ARWT brochure is in progress.

In addition to the pre-existing maps from the 1970s, WWALS has an ongoing google map made from a live working spreadsheet of information about the Alapaha River Water Trail. The spreadsheet and map include twelve public access points on the Alapaha River, at least one in each of the six ARWT counties, plus some on lakes, ponds, and swamps.

The Suwannee River Water Management District (SRWMD) has used the spreadsheet to draw additional maps. We are also talking to other potential sources of maps.

We are also making the spreadsheet information available in the online location requested by GRN. Since we keep quite a bit more information in our spreadsheet, such as mile markers, boatable low and safe high water levels, and tax assessor parcel numbers, we remove and remap a number of fields with a program before inserting into the GRN spreadsheet.

The Alapaha River has not two but seven existing canoe launches or boat ramps, plus five other access points. All dozen public access points are in the spreadsheet and on the map.

In addition, GRN has a longer list of criteria. Here is that list, with progress by WWALS on the Alapaha River Water Trail for each item.

Since we received the GRN grant, we have been focussing most outings on the Alapaha River, plus informal outings or pictures by WWALS members, including:

As promised in the grant proposal, WWALS has held a Water Trail workshop in the fall, and is preparing a Water Trail Conference for March.

To attract more people, we have in progress a contest among high school students for logo designs for the Alapaha River Water Trail. The deadline for submissions is 17 February 2015. A panel of judges is being assembled, and prizes are being solicited from local businesses. The prizes will be presented at the March Conference.

We look forward to seeing Georgia River Network at an upcoming outing or event.