The recent Georgia spills are now in the WWALS composite spreadsheet of Georgia and Florida water quality data.

Other than the very large December 2019 Valdosta spill, none of the spills (except one) obviously correlate with high E. coli as tested.

Which one? The April 24, 2020, Quitman spill, which may have been seen four days later at Running Springs on the Suwannee River. 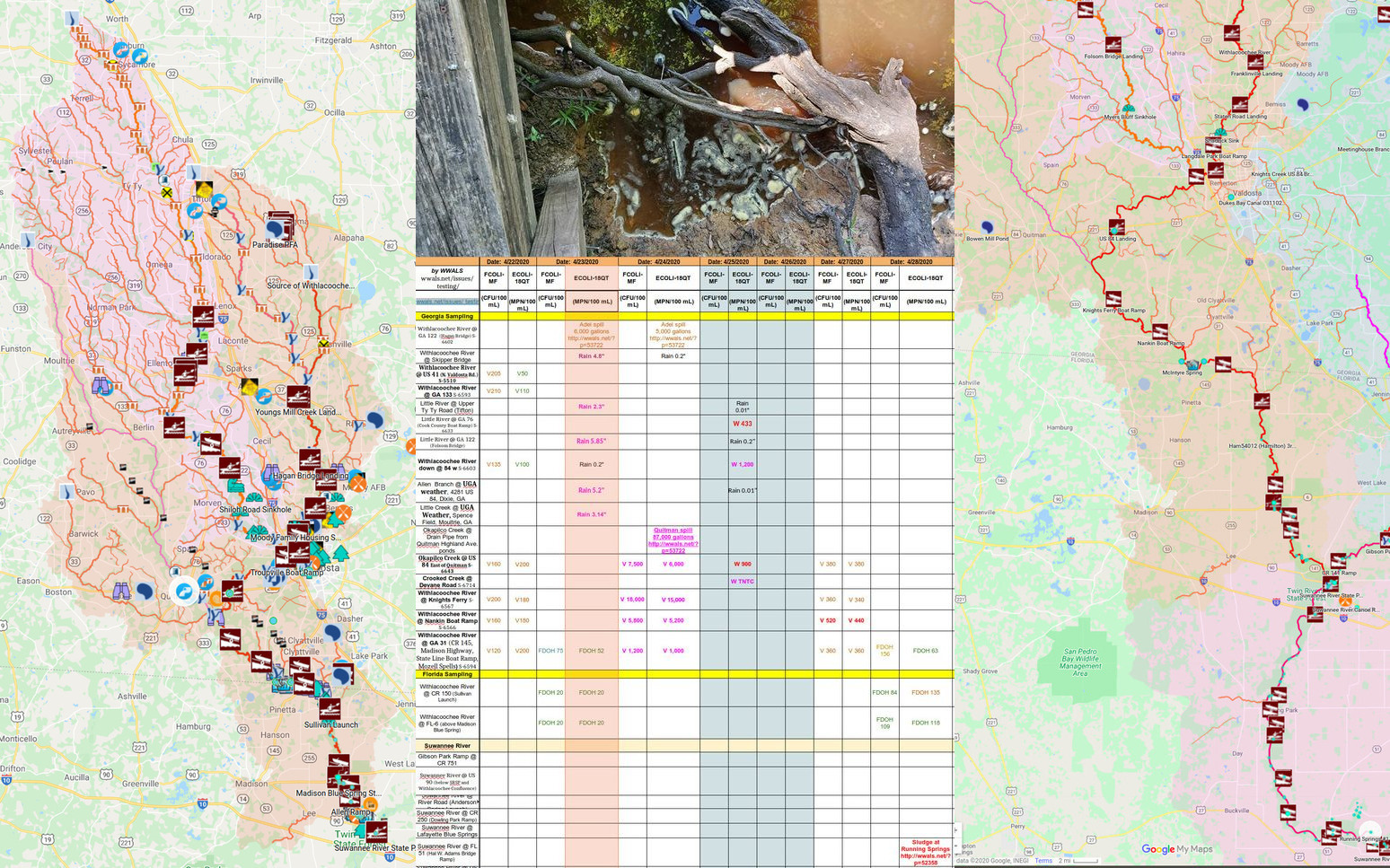 About the Rochelle and Ashburn spills into the Alapaha basin, we just don’t have enough data to say anything.

The Adel spills of 23-24 April conceivably could have made it to US 84 on the Withlacoochee by 25 April. That’s 7.15 Bear Creek miles and 44.85 Withlacoochee River miles or 52 total. There was a lot of rain. Two days or 48 hours would require the water to move barely more than a mile an hour. That’s an interesting question for the scientists among us. We don’t know what happened at US 41 or GA 133, because Valdosta didn’t report those locations for Friday, 24 April 2020 (or Monday, April 27, 2020).

But there’s one that does correlate big-time: the Quitman spill of 87,000 gallons on Friday 24 April. The location given was vague, near GA 76, which is Highland Avenue in Quitman. I’m assuming that means the Highland Ave. settling ponds, same location as the big Quitman January 2019 spill, at about Okapilco Creek mile 5. Notice this is not the Quitman Land Application Site (LAS or spray field), which is south of US 84 just west of Okapilco Creek. High bacterial results at US 84 on Okapilco Creek thus could not indicate a spill from the LAS, but could be relevant to a spill from those Highland Ave. settling ponds. 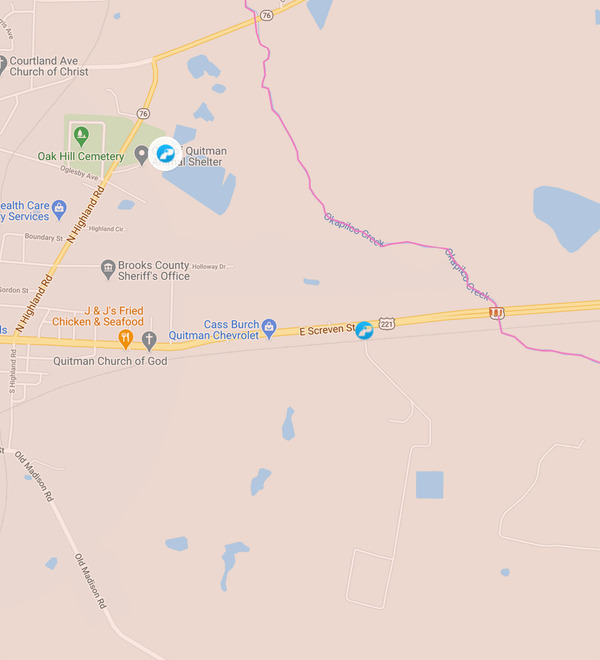 That would explain the 6,000 E. coli in Okapilco Creek @ US 84 that same day, little more than a mile downstream. The 15,000 at Knights Ferry the same day makes me wonder if the spill really started the previous day. Well, but 5 Okapilco Creek miles plus 3.65 more down the Withlacoochee to KF is only 8.65 river miles, which wouldn’t take very long, probably less than half a day. 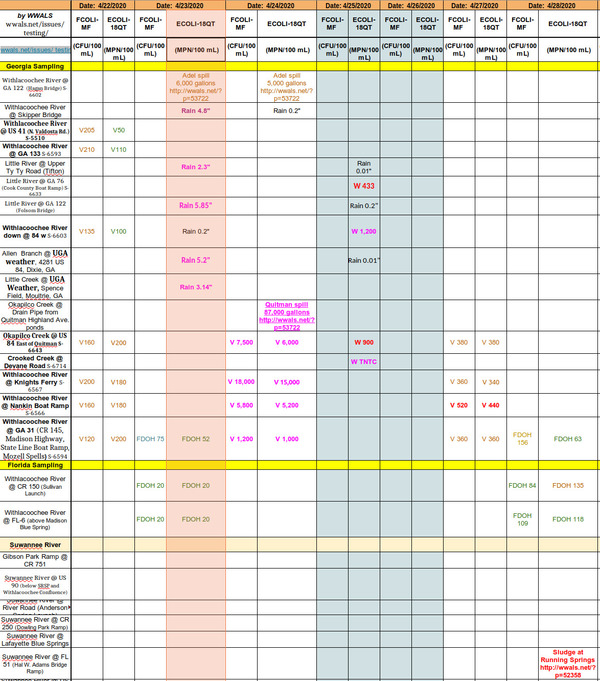 On the same Friday, the contamination had already reached Nankin with 5,200 and State Line with 1,000. It’s another 15.49 river miles from KF to State Line, but that’s only 24 water miles downstream from the spill. The water only had to be moving about one mile an hour for the leading edge to get to State Line within a day.

On Saturday, WWALS got 900 on Okapilco Creek @ US 84, so apparently it had mostly moved downstream by then.

Nobody sampled that Sunday.

On Monday, 27 April, Valdosta got 440 at Nankin but below 410 upstream and downstream.

On Tuesday, 28 April, FDOH got acceptable levels at State Line, CR 150, and FL 6, indicating it must have already gone downstream from FL 6.

From Knights Ferry on Friday past FL 6 on Tuesday is more than 31 river miles. However, the water had about 4 days or 96 hours. So sure, it could have already passed FL 6 by Tuesday.

Quitman in the WWALS map of the Withlacoochee and Little River Water Trail.

How about the reported contamination that same Tuesday, 28 April, at Running Springs on the Suwannee?

Photo: Patterson Wall, of Brown water with foam on the Suwannee River near Running Springs, April 28, 2020. 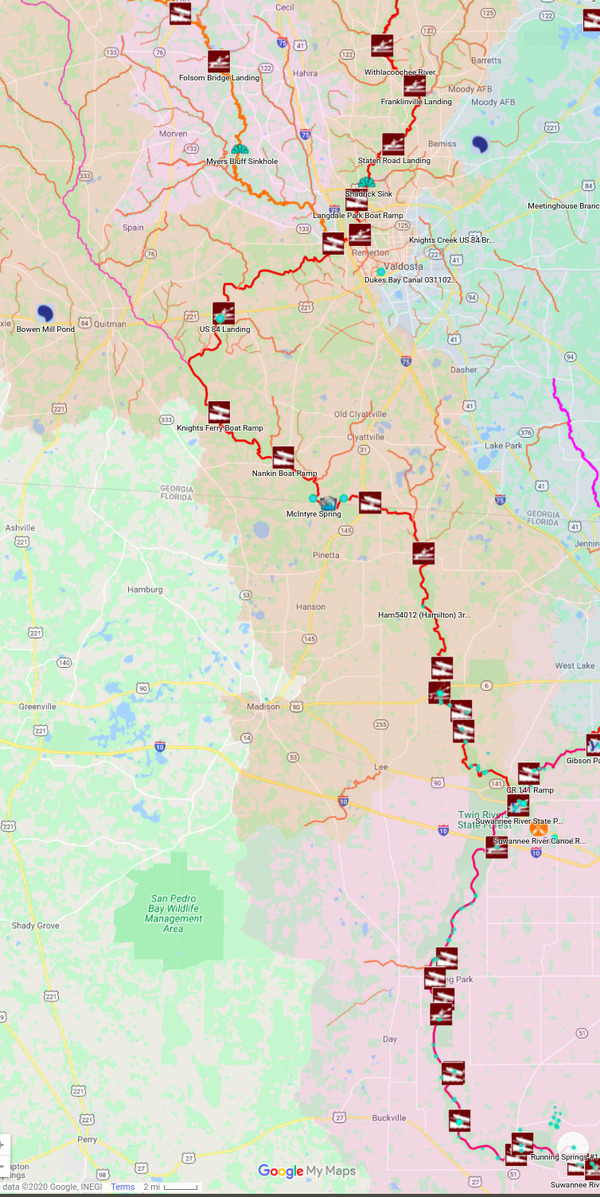 All the way to the Gulf?

We don’t know how much farther that contamination may have gone down the Suwannee River. In an earlier episode with too-high E. coli at Knights, Nankin, and State Line on February 26, 2020, SRWMD saw 980 cfu/100 mL E. coli at the Hal W. Adams bridge (just below Running Springs) on February 29. That’s three days, just like what we see for February 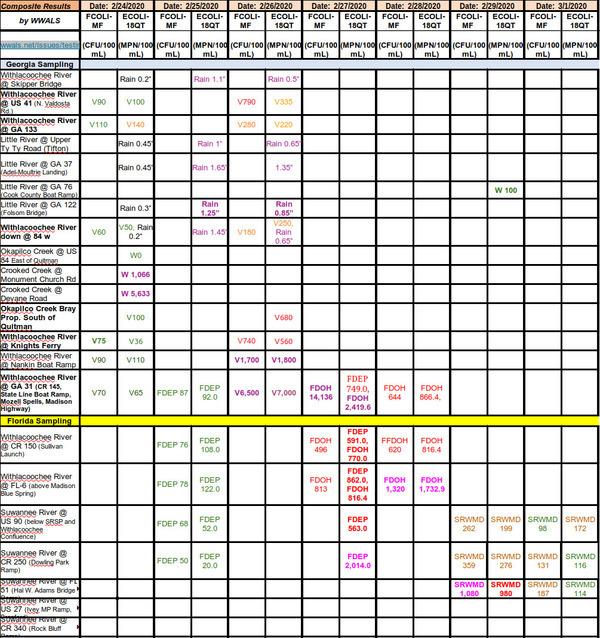 2020-03-01 Suwannee river downstream
The entire WWALS composite spreadsheet of all known data sources is on the WWALS google drive.
For context, see http://wwals.net/issues/testing/.

SRWMD predicted that contamination would reach the Gulf by March 4, with Suwannee River water velocites of between 1 and 1.5 miles per hour. That’s four more days from that bridge to the Gulf.

A more direct comparison would require checking water levels and flow. However, if the April contamination took four more days from Running Springs to reach the Gulf, it got there about May 3, 2020.

Downstream to the Gulf
In the WWALS map of all public landings in the Suwannee River Basin.

What about that 440 at Nankin?

What about the 440 at Nankin on Monday 27 April 2020? Was that coming down from the 1200 @ US 84 on the Friday? If so, why did it take 2 days or 48 hours to travel 15 river miles? Maybe that Nankin hot spot was something else that came down Okapilco Creek on the weekend?

Correlation is not causation, but….

Anyway, it’s hard not to see the Friday, April 24, Quitman spill as the cause of the very high numbers on Okapilco Creek and the Withlacoochee River that same day. And that contamination could have reached Running Spring on the Suwannee by the Tuesday.

As it happens, we did not know about the Friday high numbers until about a week later, because it took that long for Valdosta to get around to posting them.

Nobody noticed the Quitman spill, which didn’t show up in the GA-EPD Sewage Spills Report until Wednesday, April 29, 2020. Then it was entered with Quitman as in DeKalb County, GA. GA-EPD did have the basin as Suwannee and the affected waterway as Okapilco Creek, with the Quitman NPDES permit number, so we can be sure it was the Quitman in Brooks County, Georgia. I have updated the WWALS scripts to catch such things and to automatically send an email alert.

Tickets $30 online
or at the event.

Decorate your boat with lights
at Banks Lake, December 19, 2020