We got a picture with banners early before anybody left, and more later, with the trash and the beautiful Alapaha River. See also the real trash problem, the companies that make it.

WWALS charter board member Bret Wagenhorst handed out t-shirts from the Georgia statewide Rivers Alive program, from our last cleanup near this location, in 2018 upstream at Sheboggy Boat Ramp. 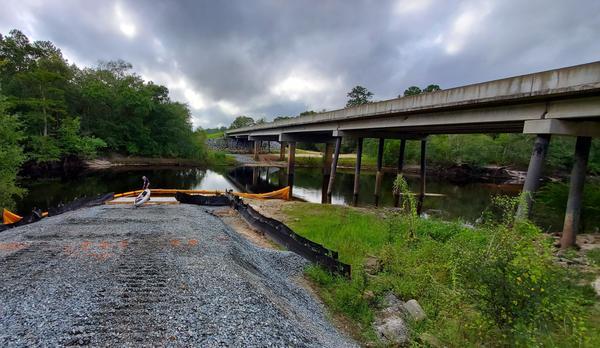 The concrete was very fresh. 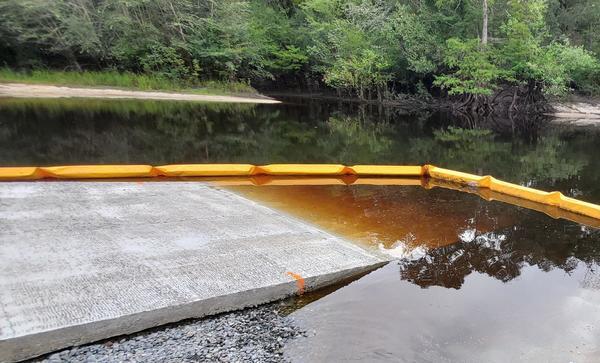 Bobby McKenzie paddled a kayak to Berrien Beach, but the river was low enough that most of us just walked across it. 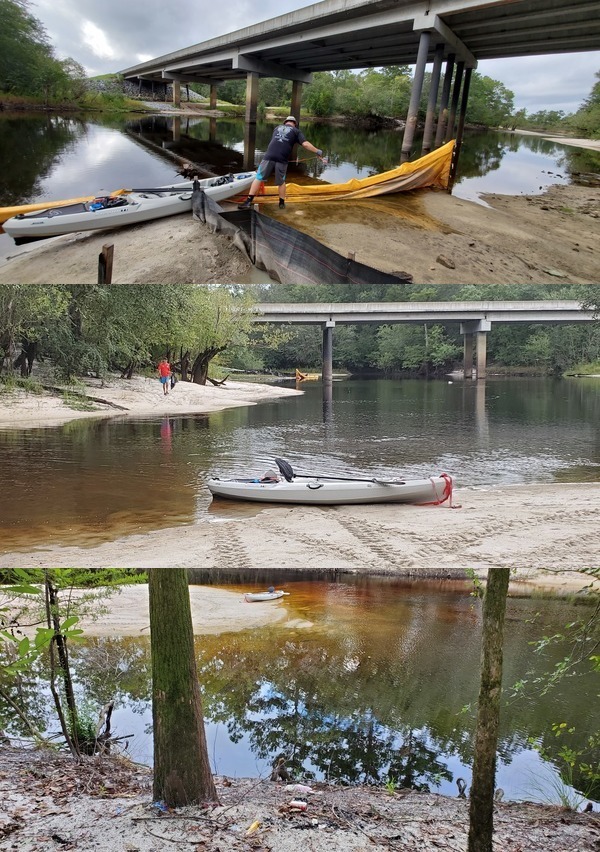 The real trash problem: the companies that make it

There was no lack of trash, including the usual cigarette butts, shotgun shells, and yes, a few used diapers. The most numerous items were plastic and glass bottles and cans. 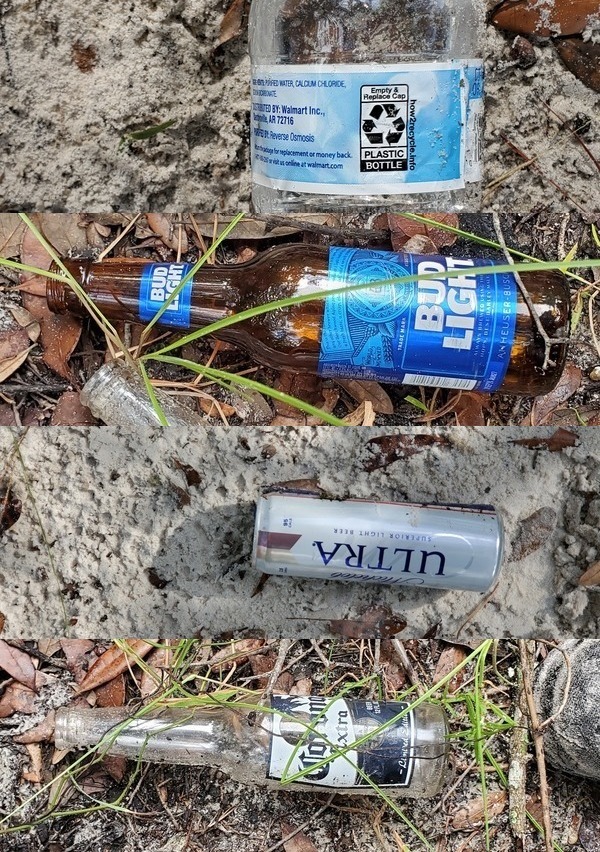 Sure people shouldn’t litter, but Anheuser-Busch and other beer makers, as well as Nestlé, Coca Cola, and Walmart, should stop making and selling disposable bottles and cans. Fifty years ago those things had deposits on them, and people would collect them for the cash.

People still do in Hawaii and nine other states. But not in Georgia or Florida. Maybe we should change that.

No, recycling will not solve this problem. There’s no market for plastic to recycle, and recycling has been pushed by big oil for years as an excuse to make more plastic throw-away containers. 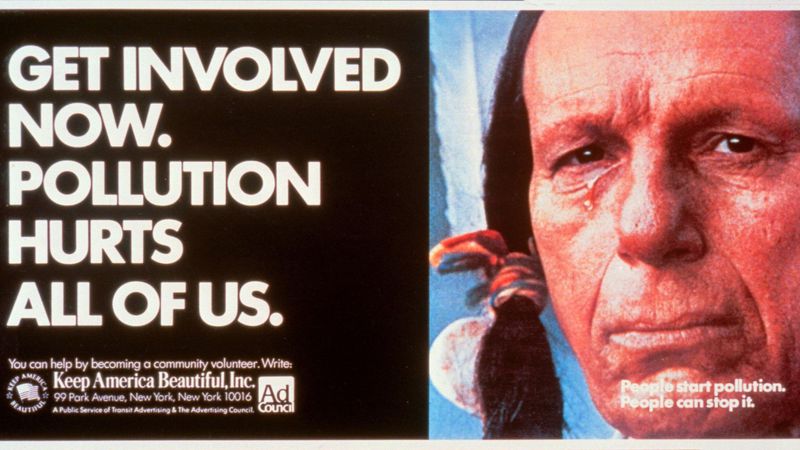 A Keep America Beautiful advertisement by the Ad Council, which was launched in 1971. (Ad Council) – Original Credit: (HANDOUT)

Well, the “Indian” was Italian-American, and that ad was part of a campaign by the front group Keep America Beautiful. Finis Dunaway, Chicago Tribune, 21 November 2017, The ‘Crying Indian&rdsuo ad that fooled the environmental movement,

Keep America Beautiful was founded in 1953 by the American Can Co. and the Owens-Illinois Glass Co., who were later joined by the likes of Coca-Cola and the Dixie Cup Co. During the 1960s, Keep America Beautiful anti-litter campaigns featured Susan Spotless, a white girl who wore a spotless white dress and pointed her accusatory finger at pieces of trash heedlessly dropped by her parents. The campaign used the wagging finger of a child to condemn individuals for being bad parents, irresponsible citizens and unpatriotic Americans. But by 1971, Susan Spotless no longer captured the zeitgeist of the burgeoning environmental movement and rising concerns about pollution.

The shift from Keep America Beautiful’s bland admonishments about litter to the Crying Indian did not represent an embrace of ecological values but instead indicated industry’s fear of them. In the time leading up to the first Earth Day in 1970, environmental demonstrations across the United States focused on the issue of throwaway containers. All these protests held industry — not consumers — responsible for the proliferation of disposable items that depleted natural resources and created a solid waste crisis. Enter the Crying Indian, a new public relations effort that incorporated ecological values but deflected attention from beverage and packaging industry practices.

Sure, we do cleanups, and people should not litter. But the companies that make that throw-away trash are a much bigger problem. For example, Nestlé wants to suck up still more water from the Floridan Aquifer, this time near the Santa Fe River, so they can pump out more plastic bottles that we’ll have to pick up. You can help stop them.

304 pounds of trash from the Alapaha River

WWALS Outings Chair Bobby McKenzie weighed the trash this time with the scale Nic Llinas of Current Problems donated at our last cleanup at Twomile Branch, Sugar Creek, and the Withlacoochee River in Valdosta and Lowndes County, where we also won an award for water quality testing. 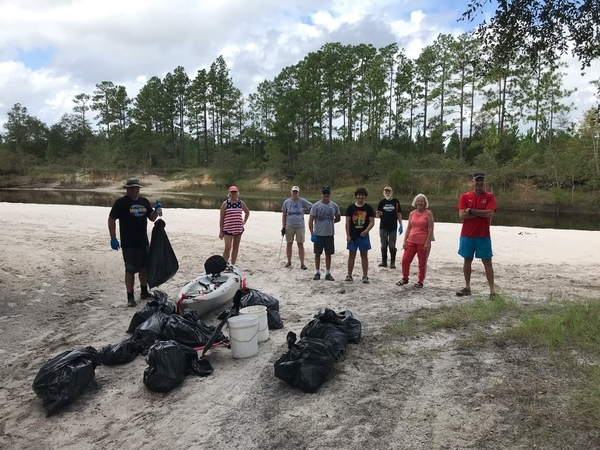 Bobby and I unloaded this Alapaha River trash at the Lanier County Dump.

Thanks to Lanier County for being more than willing to help clean up the Alapaha River.

Thanks to Donald Roberson for the idea of this cleanup. It fit well with all our previous cleanups at Berrien Beach Boat Ramp, such as in 2016. 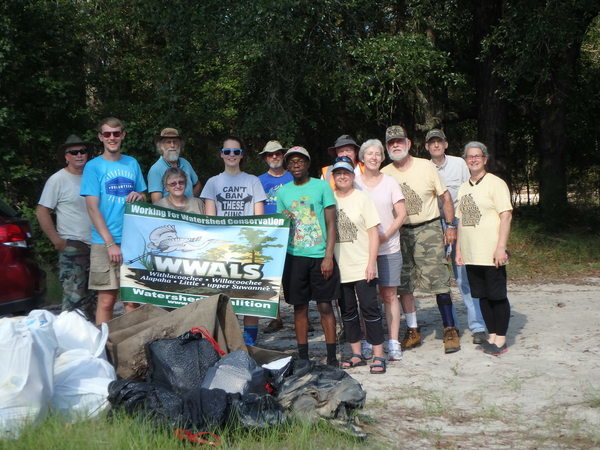 We also like to paddle this stretch of river, on the Alapaha River Water Trail, as for example in February 2017.

As Bret Wagenhorst reminded us, for many years WWALS early board member Al Browning (R.I.P.) organized cleanups here, usually with WWALS. Never many people showed up, but we have always left the place cleaner.

Al Browning was forever for water quality testing. He would be pleased to know that this same Saturday WWALS E.D. Gretchen Quarterman was conducting a water quality testing training. Nine new testers did the online pandemic-style course, and seven arrived at Drexel Park in Valdosta on Onemile Branch for the hands-on, physically-distanced, of course. The other two will do that part later. Gretchen will be conducting recertification training next Saturday, September 19, 2020, for those whose certificates are near expiring (like mine). More on those trainings in other posts. I collected water quality samples Saturday at Berrien Beach and Lakeland Boat Ramp on the Alapaha River; more on that in another post.

More pictures and a video

If you missed this one, more cleanups and outings are coming up in October: