Well, this keeps escalating, now 96,248 acres, including some on Billy’s Island, opposed by 499 personnel, 6 helicopters, 57 wildland fire engines, 6 dozers, 37 tractor plows, and 2 interagency hot shot crews, according to InciWeb today. Some crews came from as far away as Denver, according to CBS Denver 26 April 2017, and the smoke has spread as far as North Carolina. Today’s InciWeb release does claim “8% contained”, which is more than before. But they’ve pushed the Estimated Containment Date way out from their original two months in the future (June) to seven months out: “Wednesday November 01st, 2017 approx. 12:00 AM”.

This all still seems to be within the mile-wide buffer around the swamp organized after the previous big fires by the Okefenokee-Osceola Local Implementation Team. Which is good, because Waycross, Fargo, and Folkston are outside that buffer, and thus one hopes safe. The wildlife inside is no doubt not happy, but this kind of lightning-started fire has happened for thousands of years as a natural event.

It sure would help if we got some rain, though. This dryness in April is not what we used to expect.

Planned Action: Northwest advancement of the fire edge is expected to be minimal again today. Crews will continue to monitor all containment lines and mop up. Billys Island will be monitored closely and crews will be ready to conduct additional strategic firing operations, if needed. Strategic firing operations may be conducted south of Chesser Island and south of Mitchell Island as weather permits and fire behavior dictates.

Today’s Weather & Expected Fire Behavior: Southeast winds are predicted to increase 8-10 mph with gusts to 20 to 25 mph in the mid to late morning. Hot and dry conditions remain, with temperatures expected to reach the 90’s. On Monday, active fire areas that are currently backing southeast, could progress to the east resulting in increased interior fire growth on the refuge and potential fire progression of the northeast edge onto Bugaboo Island.

Air Quality Report: Light smoke could be experienced as far north as Macon and Atlanta in the morning but should quickly lift and move out by noon. The heaviest morning smoke will expected between Valdosta and Waycross, impacting Pearson and Fitzgerald. Roads that will likely be affected include Hwy 84 and others to the north. The rest of the day, smoke is expected to move north/northwest and impact Waycross and locations as far north as Hazlehurst. 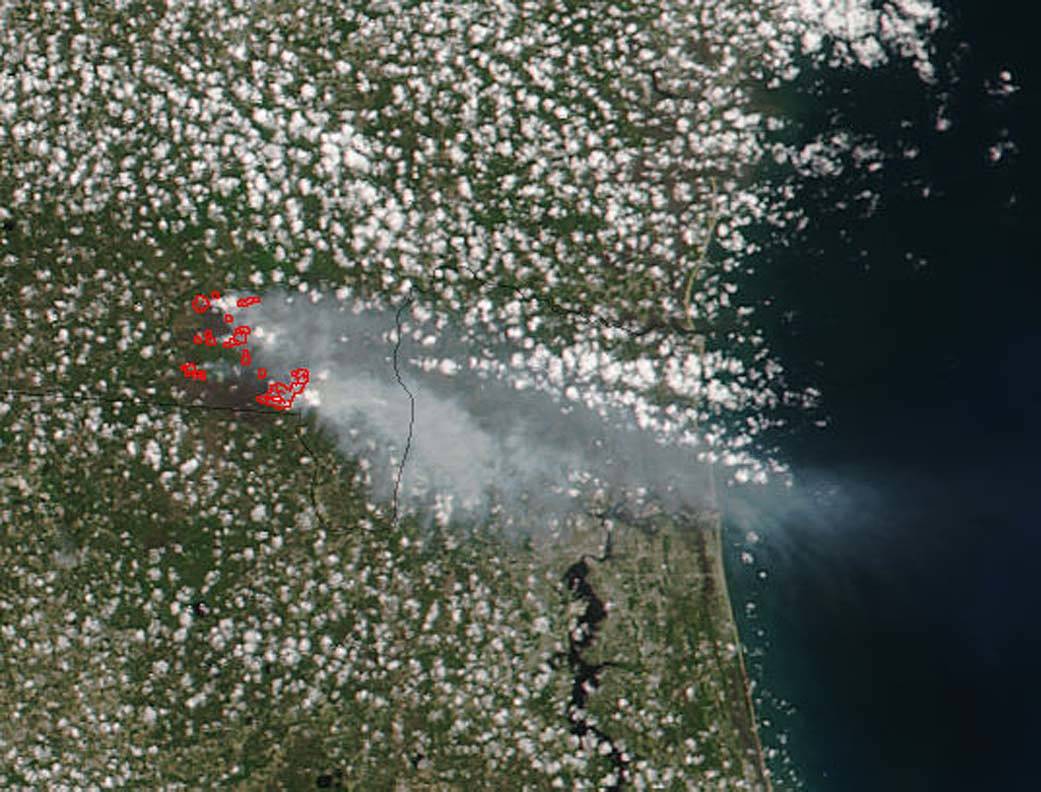 Cade Fowler, WALB TV, 2017-04-27, West Mims Fire visible from space includes that NASA image. The headline perhaps forgets that NASA’s same Terra satellite already saw the fire on April 12th, not to mention that we’re all used to using google maps, which shows satellite imagery down to a few inches.

But it’s a big fire, for sure, and its smoke has travelled far. Abbie Bennett, Raleigh News-Observer, 27 April 2017, Smoke from massive Georgia fire moves into NC again,

GREENSBORO, NC — It was hard to miss in the middle of the day. Hazy, smoky skies and the faint smell of a wildfire in the air across the Piedmont of North Carolina. Believe it or not, that smoke is traveling hundreds of miles, all the way from Georgia.

Back to the InciWeb report from today:

Driving restrictions: Hwy 177 is closed 11 miles north of the intersection with GA 94 at the entrance to the Okefenokee National Wildlife Refuge. Temporary road closures will occur as needed due to smoke or equipment.

Burn Bans are in place for the following areas:

The fire has its combined human- and wildlife-interest stories.

Let’s applaud all the firefighters from the many agencies involved in the West Mims fire. Maybe we should reward them by fully funding their agencies.