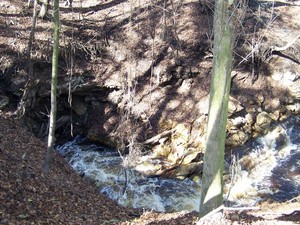 Float down the Alapaha River for a couple of hours, then walk to the Dead River Sink, where it disappears into the Floridan Aquifer. facebook event.

This is a pretty easy outing, but as always bring your personal flotation device. If you need a boat, let us know, and we can find you one.

This event is FREE! All we ask is that you are a current member of WWALS Watershed Coalition. If not, it’s easy to join online today at http://wwals.com/blog/donations/. You do not have to be a member to come on this outing. If you like the experience, we recommend that you join to support the efforts of WWALS. This continues from our February outing from Statenville to Sasser Landing, exploring the Alapaha River Water Trail (ARWT). You can see these access points on the ARWT interactive Map.

Water level should be at least 1.5′ or greater at the Statenville gauge.

If the Alapaha River is too high or too low, we will go to the backup plan on our other main river in Florida:

Meanwhile, don’t forget to come to the Third Annual BIG Little River Paddle Race, Saturday May 16, 2015 at Reed Bingham State Park on the Little River between Moultrie and Adel.

And you don’t have to, but if you feel like it you could learn this poem by Samuel Taylor Coleridge:

Where Alph, the sacred river, ran
Through caverns measureless to man
Down to a sunless sea.
So twice five miles of fertile ground
With walls and towers were girdled round;
And there were gardens bright with sinuous rills,
Where blossomed many an incense-bearing tree;
And here were forests ancient as the hills,
Enfolding sunny spots of greenery.

But oh! that deep romantic chasm which slanted
Down the green hill athwart a cedarn cover!
A savage place! as holy and enchanted
As e’er beneath a waning moon was haunted
By woman wailing for her demon-lover!
And from this chasm, with ceaseless turmoil seething,
As if this earth in fast thick pants were breathing,
A mighty fountain momently was forced:
Amid whose swift half-intermitted burst
Huge fragments vaulted like rebounding hail,
Or chaffy grain beneath the thresher’s flail:
And mid these dancing rocks at once and ever
It flung up momently the sacred river.
Five miles meandering with a mazy motion
Through wood and dale the sacred river ran,
Then reached the caverns measureless to man,
And sank in tumult to a lifeless ocean; ….